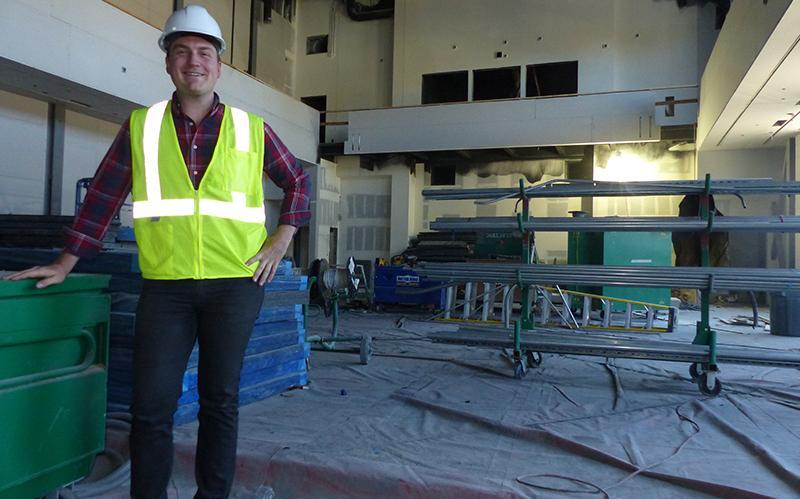 The 210 retractable seats arrived this week in a shipping container from Belgium.

And Samuel Mollner, former technical director for the Sun Valley Pavilion, is beginning to pore over  pages of directives for the state-of the art technology that will elevate the Argyros Performing Arts Center above most performing arts centers in the Western United States.

Even as workers install Parklex siding from Spain on the outside, the inside is transforming from one day to the next.

And the new performing arts center is already attracting out-of-state visitors– even before it opens.

“We’re being talked about all over the country because of the state-of-the-art features we’re putting in this building,” said Michael Hoover, the Argyros venue and events manager. “It’s flattering–and humbling–to have that recognition.”

Workers broke ground on the Argyros Performing Arts Center in July 2017, and they’re on schedule to open Thanksgiving weekend.

Founding donors will get the first crack at the new theatre the evening after Thanksgiving with a gala cocktail party headed by a special guest artist.

The center will be open for public tours and small performances showing off the main theater and its studio the rest of the weekend, said Margaret Hamamoto, the center’s marketing and development director.

The 25,000-square foot, $15 million theater was inspired by the 283-seat Strand Theater in San Francisco.

Ketchum architect Michael Doty designed a building to fit on the site of the former nexStage Theater and a car showroom. The San Francisco-based theater design firm Auberback Pollock Friedlander fine-tuned it into a performance hall, said Hoover, who worked for Sun Valley Resort as front house manager and in catering and audio/visual capacities before joining Argyros.

Outdoors in front a 2,000-square foot plaza features a pipe that will accommodate a fire pit that people can sit around or warm themselves while waiting for their ride.

Inside is the star of the show—the Tierney Theater where it will take a simple press of a button to roll out 210 motorized retractable theater-quality seats.

“The seats can be adjusted in about 30 minutes,” said Hoover. “And, if we only need a hundred seats, we can just bring it out part way.”

The theater will be able to seat as many as 460 with chairs that can be placed on the floor, Hoover said. But the typical capaciety for a theater performance will be 310.

Hoover pointed to a doorway at the southeast corner of the room.Some of the best seats in the house will be on a balcony above the stage, Hoover added.

A light technician entering through that door will step out on a hanging floor made of one-by-four-inch panels to hang any number of lights in infinite configurations.

“It’ll be like he’s walking on air 35 feet over the floor—without a safety harness,” Hoover said.

The tension grid catwalk is the new thing in the industry—one of the reasons the Argyros is on the radar of performing arts center directors and technicians across the country. In addition to lights, it will allow stage hands to hang curtains anywhere.

Hoover stopped in his tracks, pointing out how the drills of the workers below were muted.

Typically, a space like this would echo, he said. But special insulation in the room absorbs the sound and the drywall pulls sound in, as well.

That will just enhance the Meyer Constellation sound system, which is another state-of-the-art feature of the new center that is drawing attention. The sound system offers a way to transform acoustics so choral groups can sound as if they’re singing in St. Andrews Cathedral while musicians will sound like they’re performing in a concert hall.

Fifty-plus mics will pick up and amplify the voices of those on stage so no one but the softest speaker should need a microphone, Hoover said.

“We’ll be among just a handful of performing arts center west of the Mississippi to own this,” he said.

Windows line the room—a rather curious thing for a theater.

“In movie theaters the last thing they want is windows. But we want people to be able to walk by and see what’s going on,” Hoover said.

Three percent shades will cut the light when desired, and blackout curtains will be employed when producers want the theater as black as night.

A 2K quality projector, which will be one of  the best in the valley, offers such brightness and resolution that audiences will be able to see exceptional quality images with the shades up.

In addition there will be a resilient, or sprung, dance floor with shock-absorbing cushioning to reduce impact on joints.

The studio on the second floor has outstanding views of Bald Mountain, the slopes overlooking Warm Springs and Griffin Butte.

It will serve not just as a performance room but a place for meet and greets and board meetings.

Those utilizing the room will be able to walk across a bridge to a balcony overlooking Main Street to enjoy drink or conversation during breaks in the action. There will be a mobile bar and there’s even a  closet-sized space  where caterers can set up in

The café in the 2,000-square foot lobby on the main floor will feature grab-and-go breakfast and lunch items, along with coffee, beer and wine. Several screens located within the venue will allow visitors to see what’s going on in the theater.

A piano will be stored under the stairs near a coat room and the box office. The wall along the stairs will feature plaques honoring founding donors.

The basement features a full catering restaurant. Servers will be able to send plates up to the main floor in a battery-powered heater box that will keep the plates warm for gala dinners.  The AV room, the brains of the operation, is in the basement, as is a storage room nearly the size of three garages.

And Michael Doty turned what could have been wasted space into a nook for a Steinway small concert grand from the Hamburg factory.

“It’s like keeping a Lamborghini in the garage,” said Hoover.

Offices for six staff members will be on the third floor. There also will be a place for visiting producers to plug in their lap tops and set up shop.

“Come back next week and it will look totally different from the way it does today,” said Hoover. “We’ll open Thanksgiving and after that it’s go, go go.”

When construction crew began digging the basement for the Argyros Performing Arts Center they found that the foundation of the Kentwood Lodge next door overlapped. As a result, architect Michael Doty had to redesign the basement with about 20 feet less width than had been planned.